At the time that the cottage was built local towns did not yet have wide spread municipal water departments.  The cottage, completed in 1871, would have been used for over 20 years before the Commonwealth even passed a Water Act!  The goal of most early water legislation was for fire prevention; these early laws would push towns to install waterlines.  One was passed by the Massachusetts Legislature in 1890.

The Grove was a summer only community.  They did not need water lines in the area in a way they are expected today.  The lack of water lines, could explain in part, the great fire of 1927.

So what is my point? Well houses have been retrofitted over the years for bathrooms, kitchens and heating. Today's project is to remove and repair where an old gas fired heater was installed. 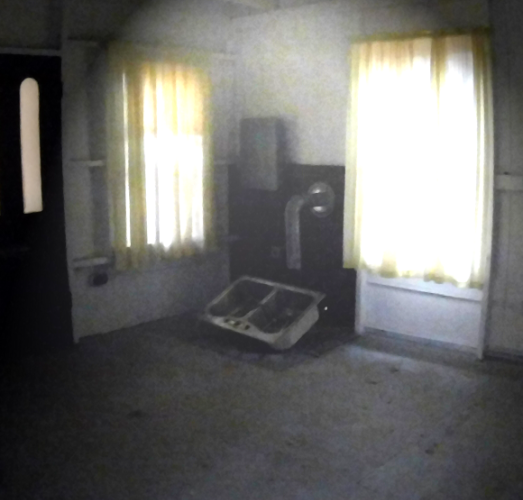 (above) Image from the fall of 2020 when I first viewed the space.  The pipe, bent at an elbow in the center of the photo at one point started at a gas fired heater and terminates in the wall of the building. The floor has a metal panel to decrease the likelihood of the floors igniting.   Inside the wall there was also a ceramic collar.

The new meter is installed on the outside of the cottage and hooked into the existing electric panel.  The old heating stove has been removed.  You can see how large the vent area is in the image above.

First step was to find wood that I could used to fill the hole in the side of the building.  There is a range of random boards under the cottage and I was able to find one that matched pretty closely.

Next I taped a paper bag to the opening and traced the inside.  I marked where the beads in the bead board was; this helped me match it up on the board I was cutting from.

Using a jigsaw I cut a curved board a little big trimming it till it fit snuggly and the bead lined up as best as I thought I could get.

Once the first piece was fitted I cut blocks for the back ... Then cut the right side ...  Then cut the left ...